In this puzzle you, the player, think of any two-digit number and the the two digits together. Subtract this sum from the original number. Remember this new number. For example, if you thought of 37 you would add 3 + 7, giving 10, and subtact it fro 37, giving 27. You will use this new number to select a Mayan image for the days in the Tzolkin calendar. The numbers 9 through 81 each have one of the twenty Mayan day images assigned to them. The number 9 through 81 are used because those are the number you get when you follow the procedure of add the two digits together and subtracting. For example, the lowest two-digit number is 10, 1 + 0 = 1 and 10 - 1 = 9; the highest two-digit number is 99, 9 + 9 = 18 and 99 - 18 = 81. The assignments of numbers to images change each play. Use your number from 9 to 81 to locate the image above it. Concentrate on this image. You do not select, tap, or touch the image; that would give it away. When you are ready, select the Solve button and the Quetzalcoatl (Feathered Serpent) senses your brain waves and, after a second or two, reveals the image you were concentrating on. Along with the image is its Mayan name. There is a Again button to play again.

The number 27 is at the third row and the sixth column.
For example, 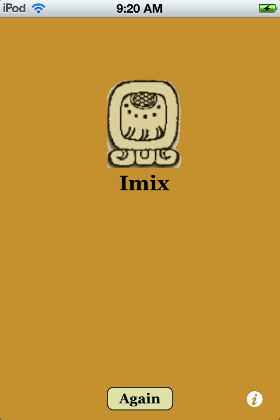 The flip-side of the main view provides a background on the 260-day Tzolkin calendar and how it combines with the 365-day, solar, Haab calendar to create a 52-year cycle.
To track longer periods of time the Mesoamerican Long Count calendar is used. It has a period called Baktun which is about 394 solar years. According to Mayan traditions, the gods had created three ages that each lasted 13 Baktuns (5122 years!). When they failed they were replaced by a new age. The fourth age, which began August 11, 3114 BC, humanity was added to the world. Twelve Baktuns of the Fourth age have completed. The thirteenth age will be complete on December 21, 2012. It remain to be seen if the gods will create a Fifth Age.

Quetzalcoatl, the Mayan deity symbolized by the Feathered Serpent, was passed on to the Aztecs. Some Mormon scholars believe that Quetzalcoatl, who has been described as a white, bearded god who came from the sky and promised to return, was actually Jesus Christ. According to the Book of Mormon, Jesus visited the American natives after his resurrection.